Navigating safely without a captain – DataSOW 2

Data and Artificial Intelligence for Object Recognition for Inland Navigation

What will it take for inland vessels to be able to navigate safely unmanned in the future? Our research project DataSOW 2, which deals with the detection of temporary and mobile objects on the Spree-Oder waterway and the Elbe-Lübeck Canal, is investigating this question. The project will run for two years and is funded by the Federal Ministry of Digital Affairs and Transport as part of the mFUND innovation initiative with a total of 400,000 euros.

An unmanned vehicle on the road can already draw on a lot of existing data, which is essential for safe navigation without a driver. On the water, however, and especially in inland navigation, the data situation is still very thin. In addition, the increasing number of transport users on the water and their wide range – from SUPs to cargo freighters – pose a major challenge for autonomous ships in the future.

With the research project “DataSOW 2” we have set ourselves the task of expanding the data basis already created in the successful predecessor project DataSOW 1. While DataSOW 1 focused on static infrastructure objects such as locks, bridges or navigation signs, DataSOW 2 aims to collect data on mobile and temporary objects located on or in the water. In addition to ships, pleasure boats and swimmers, this also includes construction sites and fallen trees, for example. The existing sensor platform on the TITUS research boat will be expanded for this purpose. 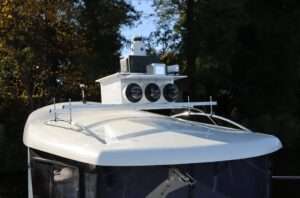 The data will be collected and processed during numerous measurement and test trips on the Spree-Oder-Wasserstraße (SOW) and on the Elbe-Lübeck-Kanal (ELK). The aim is to survey the typical boat and ship classes in different positions, light and weather conditions as well as the seasons. In addition to the image data, synchronised lidar, radar and sonar data will also be collected, which will provide better information on the position, dimension and orientation of the objects to be detected, especially under difficult conditions (poor weather and light conditions, difficult course of the fairway).

With the processed data, AI models for the detection, classification and tracking of mobile and temporary objects on and in the water can be trained accordingly. We also want to explore to what extent the data can be merged with those of other available data sources (AIS, ELWIS, tide gauges).

The aim of the project is on the one hand to make the collected data available as a live map via an open platform. In addition, we want to create the prerequisite for an assistance system that is to recognise and avoid possible collisions. This should be another important step towards autonomous inland navigation.

News on this project

TITUS Research | DataSOW2, News, Press | No Comments
What will it take for inland vessels to be able to navigate safely unmanned in the future? This question is being investigated by the recently launched research project DataSOW2, which…

The DataSOW project is supported by the Federal Ministry of Digital Affairs and Transport (BMDV) as part of the mFUND research initiative.